After a whirlwind of a week (seems to be the theme of 2016) – filled with a trip to the ER for Alice (due to Viral Meningitis and Bronchitis), several sleepless nights, a new school routine for Gavin, and a pretty hard week of training (not sure how I had the energy to get in the quality session that I did) – I had no idea how I’d feel or race.  In fact, I was looking forward to the get-away weekend with Alice just as much as the race since it was probably the last weekend we’d have away together – sans kids – for perhaps a few years.

The day before the race Alice and I drove up and checked out the (hilly) bike course.  Although feeling better, she still was coughing quite a bit, continued to have a terrible headache, and had lost her voice almost entirely. Being sick is hard. Being pregnant is hard. But when you are pregnant and sick and can’t take so many of the helpful medications – its just plain unfair!

Saturday evening, Alice and talked about the possibility of her not being up for going to the race, but I was fairly confident (knowing how tough she is) that she’d be up for it come the 4:30 AM wakeup on race day.

Unfortunately, Alice was up most of the night with a cough and headache and come race morning, she was in no shape to get up and go hang out a race all morning.  Though we both decided that her staying in the hotel and resting was the best option, the whole thing really caught me off guard.  Standing in the hotel room at 5am, feeling quite exhausted myself, I seriously considered just getting back in bed.  I felt a bit guilty at leaving Alice behind, although she reminded me that there really wasn’t anything I could do to help.

As I glanced over at my Snapple race kit, the idea of not racing immediately left my mind.  I had put a good deal of mental and physical energy in my prep for this race, had some specific goals I wanted to accomplish, and most importantly, I realized I had a team to race for.

The race went well.  I met the goals I set out – mainly a strong swim and negative splitting my run.  I really also enjoyed some extra time catching up with a few other fellow athletes before and after the race and was reminded that there really is a great sense of community at triathlons.  Reflecting back, I’m even more grateful to be a member of the Snapple Tri team, a really fantastic group of dedicated athletes who, know it or not, were a huge part of my successes for this race.    Although I really missed having my family at this race, it gave me an even greater appreciation for my “triathlon family.” 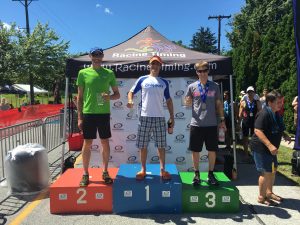 Now I’ve got six weeks to get myself healthy and rested, build up just a little more fitness, and then put on some polishing touches before Ironman 70.3 Atlantic City on September 18.