Getting Honest about the Full Distance – A Pre-Race Race Report

So I’m doing an Ironman in less than a week.  I honestly feel a little hypocritical in writing that.  For the past 3 ½ years, ever since finishing Kona in 2014, I’ve said to myself and others that there is no way I’m doing another Ironman…I have ZERO interest.  While I was honored to have qualified to race in Kona, my race experience was fairly miserable.  I didn’t come anywhere near what I thought I was capable, suffered from pretty bad dehydration on the run, and just did not have any fun.   And so here I am, just a few training sessions away from toeing the line at Ironman Maryland.  So what gives?  I digress:

After Ironman Eagleman in June, my race plan for the year was to take a week or so off (which I did), and then re-focus for my second big race of the year, which was Steelhead 70.3 in early August.   I got back into training, and on a whim, decided to race Rev3 Williamsburg 70.3.  Previously, that was my best 70.3 to date –and perhaps the only time in my career I will go under 4 hours.   So I headed down to Williamsburg, and had a really solid performance, coming in 2nd overall with a time of 4:03.  However, I felt that something was just “missing” from the race.  Being that I hadn’t planned on it and had almost no rest, I chalked it up to the fact that it just wasn’t a goal race and that perhaps the “blah” feeling a should be somewhat expected.

After Rev 3 Williamsburg, I got right back into training, put together a really solid 2 weeks and then started my taper for Steelhead.  Other than dealing with a sick kid (pretty much par for the course when you have two toddlers), the build up for Steelhead went really well.  Since much of Alice’s extended family is from the area we also had planned a family get-together of sorts and even rented a house to share with Alice’s parents.  Surprisingly, I seemed to lack my normal race excitement in the days prior to the race.  Usually, I get pretty excited and nervous as the race gets closer, but for whatever reason, I completely lacked the pre-race nerves.  I commented on it to a few others, but tried not to make much of it; I thought that it mostly had to do with the fact there was a lot else going on  (10 hour car drive with two kids, house rental with in-laws, family get-togethers etc..) and I was a bit distracted.  The morning of the race, I finally started to feel a bit more like myself, but even still, I wasn’t all that fired-up.  It simply seemed like I wasgoing through the motions.

Despite having a career-slowest swim, my race ended up going pretty well.   I can say with some certainty that one of the reasons (in addition to the super rough water) for my slow swim was that I simply wasn’t overly motivated when I started.  In my experience, for a good 70.3 race, you need to be willing to hurt as soon as the gun goes off all the way until the finish line and I simply wasn’t there.  Nevertheless, after getting out of the water and seeing the time on my watch, I think I panicked a bit which really got me going.  The bike went well – very good power (think I averaged around 265 watts) as did the run.  Neither were amazing, but both were solid.  I was super pleased to have finished with a good time for that course and as the 3rd OA Amateur (behind two of the top non-pros in the country). 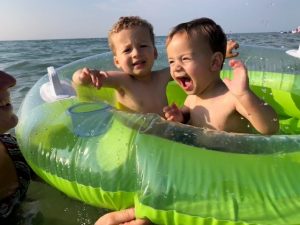 Gavin and Grady on Lake Michigan 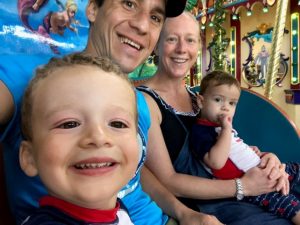 As soon as I finished, the question of what to do next quickly started going through my head.  I tossed around ideas  – anywhere from trying a shorter race such as the Nations Triathlon (thank goodness I didn’t pick that race which never happened!) to something longer.  I don’t dare consider a full distance do I ?…

So now to get to the “getting honest” part of this post.  Ever since Kona 2014, I’ve said that I had “ZERO” interest in doing another full . But honestly, that’s only partially true.  The full truth is that I had “some” interest, but was really quite fearful.  I had put so much stock in my last attempt – logging 25 hour weeks (probably way too much), slacking off at work, and sacrificing my marriage (Alice and I had been married just over a year and I really put some strain on our relationship) – that I was (am) scared to give it another try.   I was not only fearful of working really hard and having a poor performance (isn’t everyone fearful of this), but more importantly, I was fearful that I wouldn’t keep myself in check and would go overboard again.  Being self-coached and loving to train, it’s really easy to do!

And “keeping myself in check” was one of the specific reasons why I decided to do Ironman Maryland.  The plan was to have a very short amount of time where I could not do too much training – three weeks in fact.  In part since I really just don’t have the time to put in 20-25hour weeks again, and in part since I’m curious what I can do based on my 70.3 training with just a short (and hard) training block.  Alice and I bounced around a few other race options – some even closer in time and some later this year – and IM MD seemed to fit the best. 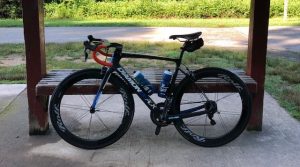 My DB road bike before one my 6 hour rides…

My plan was to do a really solid three weeks of training – similar to what I was doing for my 70.3 training but also adding in some much longer runs and longer rides.  Thankfully, Alice made this possible by taking the boys to Baltimore for a weekend and organizing several extra weekend playdates.  I wanted to push really hard, but not so hard that I was completely smashed (I’ve done that before), and then back it off just slightly for 10 days or so and then back it off a bit more for the final 10 days leading up to Maryland.  From my experience in Kona, I also knew that nailing my hydration and nutrition was going to be critical for a good full distance race.  And with just three weeks, I spent an inordinate amount of time calculating sweat rates, reading up on the latest research on electrolyte replacement, and doing a as many gut “tests” to see what my stomach could (and couldn’t) handle.  I’m pretty certain that Alice is quite tired of hearing me talk about water weight loss during workouts and refueling strategies!

So here I am – the better part of the year training and focusing on 70.3 + 3 big weeks + 2 medium weeks and now easy week.   The last month and a half were hard (a big commitment for the entire family) but also quite rewarding.   And now I’m curious (and nervous) to see how this works out.  If the race goes like the training did for the 3 hard weeks – I’ll do great.  If it goes how it’s been since that time, I could be in for a long day.   But in either scenario, I’m really glad I gave this a try.  I stuck to the training plan for the last 6 weeks, really worked on improving my daily nutrition (for me, that simply means eating more), and still managed to do pretty good work in the office, be a loving and supportive father to Gavin and Grady, and even managed to be a pretty decent husband*.

*This has been independently verified 🙂 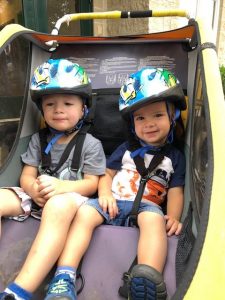 The boys love taking the bike stroller to daycare. Using a single-speed to pull them and I end up with a tough workout!