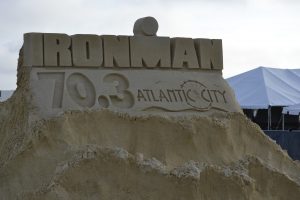 Last weekend I raced Ironman Atlantic City 70.3.   Being that it was my goal race of the season and having focused on it for almost a full 12 months, I was pretty excited to see what I could do.  I felt fairly good about things – I was coming off a 1st place OA and 3:59 PR 1/2 Ironman at Rev 3 Williamsburg 2 months prior, a 1st place OA and course record at Fort Ritchie Oly in August, and probably the best 3 week training block I can recall before I started my taper.  I even managed to stay injury free (no broken toes before this race) and somehow dodged a few colds that Gavin was circulating around the house (it seems like pretty much nonstop colds and viruses since he started daycare/school in July 🙁
The day before the race I did much of the same as before Williamsburg (thanks to my sister for arranging an OWS and Katie P for hanging out as we got registered and bikes racked etc.., and to Alice for coordinating Gavin’s schedule, food, naps, toys, and play activities) and was able to spend some time with my family.
Race morning went smoothly – the body was feeling good. I was surprised to hear an announcement about 15 minutes before the start that the race director had decided to shorten the swim from 1.2 to 1 mile because of dangerous water currents; I figured things must be relatively rough since IM doesn’t usually change things – especially so last minute – unless absolutely necessary.The swim went extremely well for me.  I started off smooth, got away from the rest of the wave almost immediately, and got into a strong and solid groove from the get go.  It was my first time racing in my Xterra Vengance wetsuit, and I can say without a doubt, the suit is fast.  I can’t actually recall having a single piece of equipment/clothing ever feel so fast before.   The currents did feel strong, but nothing too unmanageable. 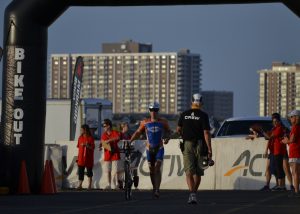 I was pretty anxious to get on the bike and see what I could.  Since I rode so well at Rev 3 Williamsburg  where I averaged about 15 watts more than I had planned, I wasn’t sure if I could do that again or if it was just a fluke.  In all honesty, I thought a few times after Williamsburg that my power meter maybe wasn’t calibrated correctly since I never expected to be able to push that sort of power for a 56 mile ride! I started off quite conservatively, and built my power for the entire race.  And felt pretty good on the bike.  I matched my power (averaged just 1 watt less) than Williasmburg and felt equally strong.  The bike went almost as good as the swim, except for the minor (or so I thought at the time) fact that I missed grabbing a water at the last aid station.    I came into T2 feeling relatively good, and excited to get out on the run. 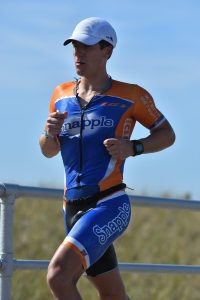 Coming off the bike I still felt solid.    Completely focused on my perceived exertion and heart rate, I ran my first mile not paying attention to my pace.  After 6 or so minutes, I glanced down at my watch and found myself running a 6:02 pace.  I felt relaxed, collected, and smooth.  But here’s where my B- for execution is “assigned”:  I had planned on starting at a 6:20ish pace for the first few miles and then gradually building my pace from that point.  When I noticed my 6:02 pace, instead of backing off, slowing things down, and executing as planned, I kept my 6:02 pace up for another mile.  I hit the boardwalk still feeling strong but the HR started to creep up, and the pace started to creep down.  That trend continued   for miles 3, 4, and 5 as I pushed into a headwind.  To keep myself motivated, I kept thinking about the fact that I’d have a nice tailwind after the turnaround, and could step up the pace a bit more.   However, after the turn around, with the wind at my back, the cooling effect was diminished and the heat really started to take over me.  I quickly realized how much missing that last water bottle handoff wa 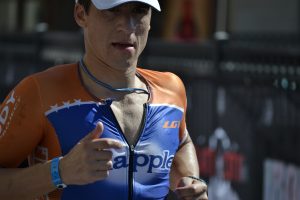 s going to hurt – I wasn’t sweating and my HR started to climb even more.  By mile 6 and 7 I had shifted from trying to hold a solid pace, to slowing myself down just enough so I didn’t implode.  And that’s how it went for the remainder of the run – just barely hanging on.
I was lucky enough that there was amazing fan support, a decent number of aid stations, and that my swim and bike splits were good enough that I was still in the mix for a very respectable overall finish time.  But those last 7 or 8 miles were tough – both physically and mentally.  I had missed some key hydration, started my run faster than I should have, and I paid the price.  I finished in 4:08, enough for 4th place OA (maybe 2nd or 3rd if they hadn’t changed the swim course later in the race…I won’t bother retelling this story now), and 1st in my AG. 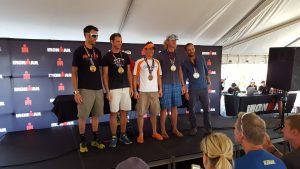 And as the title to this posting reads, I was super pleased with my effort.  I gave it all I had.  Not only on race day, but in my training leading up to the race, my taper, and the few days pre-race.  I left it all on the course.  But as I learned, some days, giving all you’ve got is just not quite enough.   Effort needs to be paired with execution.
For now, I’m focusing on the A for effort but will not soon forget the importance of race execution. I look forward to more races in the future where I can attempt to piece together a race where both my effort and execution are A+.
Tweets by @toddrburns