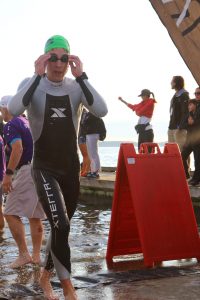 It’s close to three weeks post Ironman Maryland and a big smile still comes across my face when I think back to the race.   I certainly felt like I had the potential to pull together a good result, but to come away as the winner of an Ironman race, was something that I really didn’t think was in my cards.   Looking back on the race, my data, and my training leading up to it, I really did not do anything that was overly exceptional. Instead, I did exactly what I had read about and what had been suggested to me by much more experienced coaches and athletes – I put together a solid training day up until mile 20 of the run, and then started to race for the last 6 miles. My swim time was a bit slower than I had planned but it turns out that the course was probably 200 yards or so long. So, my swim was as predicted. 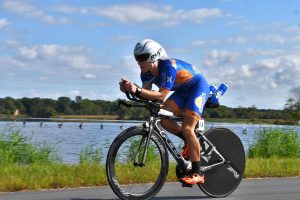 Can’t say enough about how much I love my Rolf Prima wheels!

The bike course was lengthened 2 miles the day before the race so it was exactly 112, and like the swim, my power/pace was just as I had predicted. In fact, my average wattage of 216 was probably 5-10 watts lower than I had planned but I wanted to make sure to be a bit conservative on race day.   For the run, the first 20 miles were also as I had planned – other than 2 quick stops at the porto-potty (thankfully I had changed into a run outfit – it made it so much quicker than trying to get in and out of a one-piece!) my HR and pace were just where I would have expected from my training. 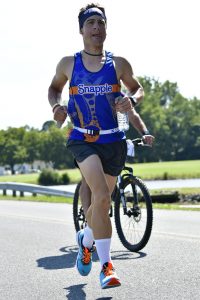 The last 6 miles of the run however, were something pretty special for me… after coming off the bike in 2nd, I moved into first place fairly quickly. I stayed there until mile 13 (and my second bathroom trip) and was passed to move back into 2nd. I stayed right there for the next 6 miles, pretty much siting on the heels of the guy in 1st place. I was told by a bike spotter that he started about 30 seconds behind me, which meant that not only did I need to find a way to pass him, but I needed to run at least 5 sec/mile faster for the last 6 miles.   And from mile 13 to 19, I was not able to do much other than just sit on his feet   As we approached the special needs bag pick up area, I was starting to think about trying a few things in order to pass him. Just as I was contemplating a move, he slowed to grab his bag.   And something inside of me – totally unplanned- said it was time to go. I had programed an extra lap on my Garmin so that if I found myself struggling at some point during the run and needing a “reset”, I could restart things.

And that is exactly what I did. 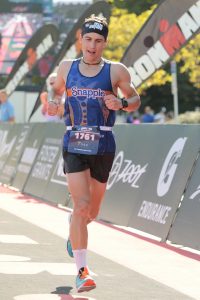 Been running in the Salming enRoute shoes this year. Train and race in them and zero running injuries all season!

I hit lap, and decided to up my pace to a 6:40/mile for the next two miles, back it off for two miles so that I didn’t overshoot things, and then have the remaining 2 miles to give it whatever I had left. Skipping my special needs bag – something that I had meticulously packed and was certain that I would need – was just beyond comprehension. No doubt it was a giant gamble.

But it was a gamble that paid off. Since I had skipped my special needs I knew that I had to make up the nutrition and hydration so I changed up my strategy and started walking through each aid station, drinking 2 cups of flat coke and 2 cups of water. The last six miles were fantastic. I ran at 6:40 pace (something I had done several times during long training runs) for 2 miles, backed it off to 6:55 pace for two miles and then gave it what I had for the last 2.   It never ceases to amaze me that no matter how sore your legs are, once you get to the finish chute after a good race, all that discomfort is forgotten. And it’s a good reminder that even on the hardest of days, there is likely a whole bunch more left in reserves – something that I continually strive to get at during my hardest training and racing.   The experience of crossing the finishline first at a full distance race and get interviewed by Mike Riely was once in a lifetime and one that I will not soon forget! 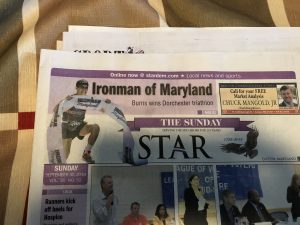 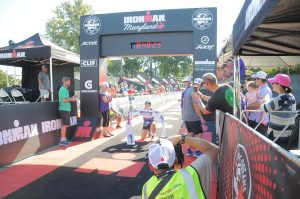 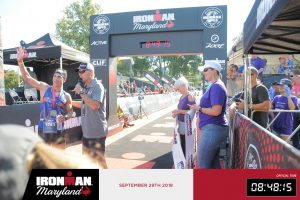 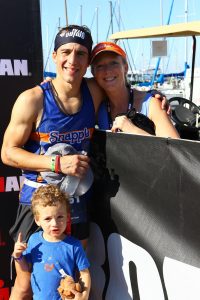 “Going to Kona?” Since finishing IM MD, I have been asked this quite a lot by strangers, family, and friends. And to the surprise of just about everyone – save Alice – the answer is “Nope!”   While I could go on at lengths about my reasons, it really boils down to this: I don’t want Kona bad enough to make it worthwhile. I absolutely love competition and Kona is clearly the place to find some of the best of the best in triathlon. However, the number of race variables that are uncontrollable – most notably, drafting on the bike in a super crowded course – combined with the time and financial costs just were a bit more than I was worth swallowing. I absolutely want to go back at some point in the future and hopefully will be presented with another opportunity. But I just don’t want Kona bad enough right now.

So what is next?

Well, similar to my decision a few months ago going from “I have no interest in doing another full distance triathlon” to signing up and racing at IM Maryland, I have gone from “I really enjoy racing at the amature level and don’t see much of a reason to race professional” to this: 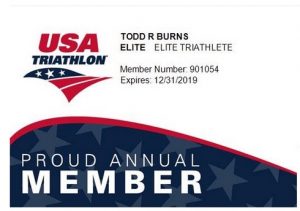 So what is next is that in 2019, I will be racing as a professional!   My reasoning is pretty straightforward: While I fully understand why events are going to a rolling/time trial swim start, I simply don’t like it. When I sign up for a race, I want to race. By going to the professional level, I will be able to start up front (perhaps finish in the back!) and race head to head. I’d much prefer to finish at the back of the pack and know where I stand than spend 4 or 8+ hours “racing” when I have no clue how I am doing. I am extremely motivated in my training and often enjoy it as much as the races. But when I get to an event, I want to experience the competition.   So, instead of being “ready to rumble”, perhaps my 2019 motto will be all about being “ready to be humble”. I suspect moving up to the professional level will be a whole lot of that!   For now, I’m going to enjoy putting on some extra weight, focusing a bit more in with my strength program, and most importantly, spending some more time with these guys : 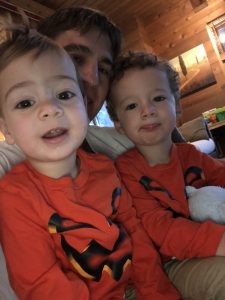 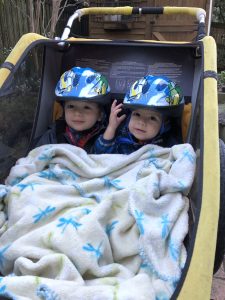