I broke 4 hours for a ½ distance triathlon! Wow. Although this was a career goal of mine, I honestly wasn’t sure I would ever achieve it. Especially not for this race- I only had about 4 weeks of run training after my broken toe and I (actually, this was Alice’s (great) idea) decided not to do a full taper for the race in the interest of keeping the focus on IM 70.3 Atlantic City in September. Nevertheless, I felt good the days leading up to the race, and things just went super well. I may never break 4 hours again, so I’m going to savor this one! 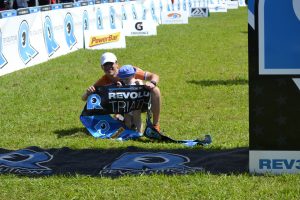 After a race, as much as I tend to think about areas I can (and want to) improve, places that I could have done things slightly differently, and small details that could use a little tweaking, there were simply a myriad of things that went very, very well. When things go well, it’s sometimes easy to overlook them and not give them due credit, so in an interest of not making that mistake, I’m going to focus on of all the things that went well (I’ll conclude with just one small mistake / lesson learned):

It was hot! Never felt hot in the water like that before, but with temps in the mid 80s, it was pretty toasty. I knew I really wanted to push the swim hard as I had been swimming really well the few weeks prior. The first guy got way a head of the pack (can’t believe he split the time he did) and the second guy got off pretty quick too. After about 5 minutes, I found myself in “no man’s land” without a set of feet to follow and no one behind me. I made the decision to burry myself and push extremely hard to catch the feet of the second place guy. I’ve never done this before and knew it was risky with a long day a head, but also knew that I had never finished a triathlon and thought to myself, “I swam too hard and tired myself out.”   After about 10 more minutes (seemed like an eternity), I managed to catch the feet of the second place guy and held on to him for the last 10 minutes of the swim. Pushing that hard turned out to be well worth it. 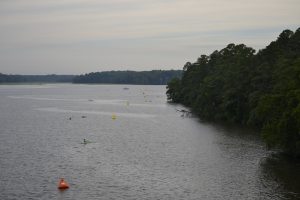 The bike was just amazing. Absolutely everything went well. I pushed 30
more watts than I did at Eagleman 2014, nailed my nutrition and hydration, 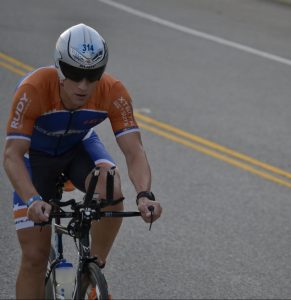 and actually felt better the longer I rode. I was amazed to watch my HR drop as the ride progressed.   I actually can’t recall that ever happening before – especially not when pushing myself at that intensity. Don’t think there is anything else I need to say about the bike – it was a freakin’ blast!

I knew the run would be interesting since 1) I had only had a month of run training since my broken toe 2) I pushed the bike hard 3) it was getting hot outside. The run was an out and back 2x, so it was helpful to look at the pace/data for each of the two laps. First lap was actually very good. I planned on focusing on my heart rate and perceived exertion for the run so when I looked down at my watch after the first mile and noticed a lower than expected HR, and a faster than expected pace, I was psyched. However, after about 4 miles, I went from feeling pretty good to feeling pretty: Fried. Done. Tired. Sore. Frustrated. Hurting.   And that was how the last 9 miles remained. It was brutal. I tried, extra an extra gel, water, ice, breathing techniques, mindfulness, detachment, and smiling and not much seemed to help. It was really just about holding on, doing what I could to not totally blow up and keeping the forward progress. As my pace slowed, I kept telling myself that once I hit mile 12, it was downhill (mentally and literally) to the finish and that I could cruise home. And when I hit mile 12, and the downhill, I felt so tired that I still couldn’t pick the pace back up. I knew that I would be fairly close to the 4 hour mark, but I was so tired and knew that I simply couldn’t push any harder, that it wasn’t worth even looking at my watch for the overall time. And keeping with my focus of things that went well for this race, I absolutely did as much as I could until I got to the finishing line. 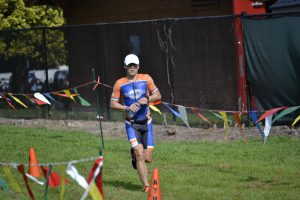 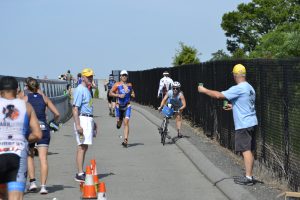 After the finish, I was pretty amazed but also thrilled that I had actually broken 4 hours.   Being that I had the support of Alice and Gavin at the race, both of my parents, and my sister, it was great to be able to share the experience with them. Being all that they scrafice to help me in my triathlon endeavors, I was really quite grateful. 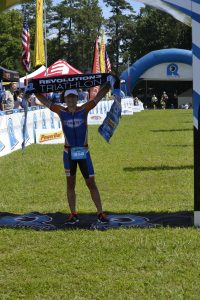