I had six races and six struggles this year.  I was dished up some ass-whopping from fellow competitors and my body. All. Year. Long.

From starting off at St. Anthony’s triathlon and coming out of the water in 2nd to last, to dealing with ongoing back issues that steadily got worse, to unexplainably having both of my quads cramp during mile 11 of Marine Corp Marathon, it was a humbling season. Sport can be incredibly uplifting at times but equally challenging. And a relentless challenge it was. I did my homework before electing to get my pro-license and knew that it would be an uphill battle, but to have it coincide with some unexpected challenges certainly was not part of my plan. It hurt.  And even one month removed from my last race, it still stings a bit.  But rehashing the details of this season’s struggle won’t be of any value for me, or anyone who happens to read this.  So, instead, I’d like to focus on my top six lessons learned in my first pro season.

1. Numbers do not equal fitness

“More work equals bigger numbers, which must mean I am getting more fit.”  “If I take a short rest before the race, watch my recovery numbers rebound, I must be ready.” “All TSS is created equal.” No, no, and no. It took me a good 4 years, but I finally have learned that this is dangerous and it is wrong. As my wife – someone who has never used Training Peaks and logs her workouts in a paper journal succinctly stated one day: CTL is simply a measure of the stress you have put your body through and it may or may not correspond with fitness gains. If you don’t recover from that stress, the fitness will not be gained.  The hard part is not tracking the stress, but figuring out how and when you can stress the body so that it is done productively. Heck, who doesn’t like to see their Training Peaks graphs show upward trend? Seeing “better” numbers provides a real comfort that you are doing something “right.” But focusing only on these numbers is not only misleading, but as my season is a testament to – it can be pretty detrimental.

The only thing that doesn’t change is change itself.   For the past few years, I had a fairly regular routine – and it worked pretty well.  While I did not have not a crazy high volume (I don’t understand how some people can fit in 20+ hrs a week with kids and a job – the math doesn’t add up!), I tended to respond pretty well to a good dosage of work.  I saw steady upward progress and was able to stay mostly injury free (other than my back which will eventually have its own dedicated blog posting).  However, keep at the same thing long enough, and it will stop working.   And I learned this year, I am not getting any younger – recovery from intense sessions takes longer and strength work in the gym really can take a lot out of me if I am not careful.  What I have taken away is that I have been lucky enough to have several years of solid training and racing which provides me a pretty solid foundation of base fitness.  Can I get away from doing any long rides or runs?  No way.  But I have found that doing hours and hours of long training days just doesn’t yield the same benefit as it used to and my focus needs to shift further toward quality (and then recovery) over quantity.

I will never forget sitting in a soccer goal I had built, staring up at the stars, for over an hour, feeling sorry for myself. It was late at night, after a nighttime high school soccer game loss to a town rival.  I was devastated.  I have never taken loss too well and this experience was just one of many as I grew up. And to be honest, it wasn’t until recently  – in my late 30s after several decades of competitive sports – that I have finally come to appreciate – and value – the importance of showing up for yo

ur family, friends, and work, even if the race doesn’t as planned.  Pouting is always an option, but I have yet to go that route and have it lead to something of use.  This is not to say I don’t (and won’t) get disappointed when things don’t go as I had hoped.  The difference is that I can turn that feeling off, focus on other things in life, and more productively move on from the race experience.  And if you think about it, in a triathlon, everyone but one person in the entire race will “lose” to someone else.  Only one single person is “wins” the race.  There are much better ways to quantify success.

What works for me is that I don’t need to swim much at all. I know, folks get kinda annoyed when they learn that I only swim once or twice a week, but that is all I need. I put in loads of time in college and am lucky that I don’t have to anymore. Will I get out of the swim in a front pack of a pro race? No. But guess what?… Improving my swim was a big goal in the offseason this year and I managed to get a lot faster in the pool. In fact, I was swimming about as quick as I was in college. But what didn’t work is that I didn’t get faster in races. My improvements in the pool didn’t help me at all in the open water; in fact, my splits were a bit slower. So I sacrificed time that I could have devoted to biking, running, and recovery for something that just didn’t pay off.  Its always good to try things, but if they aren’t working for you, don’t force it.  For me, in 2020, I will go back to just a swim or two a week, and focus on making improvements in other areas.

This one is so obvious but so easy to forget. Sleep. Eat a balanced diet. Include time for friends and family. Train reasonably hard. Going into this season, I felt like finally, I’ve got the basics down.  But knowing what the basics are, and executing them – day in and out, is a different story.   Going off of 5 ½ hours of sleep and mediocre fueling (I say “fueling” and not “eating” because I eat pretty healthy  – my big challenge is nutrition timing), is not going to cut it if you w

ant the get the most of yourself.  I’ve learned that I still have progress to make here.

6. There are no guarantees

This one really comes from the Marine Corp Marathon – my last race of the season and is such a good reminder that sport is not a perfect science. I had been particularly careful in my training leading up to the race to make sure I wasn’t over-doing it: my run training had progressed steadily and rather significantly the 10 weeks prior, such that I was running about as well as ever.  I executed speed work sessions, tempo runs, and long runs, and took a proper 10 day taper going into the race.  My HR, HRV, and motivation (for me, this is one of the best metrics for me to know if I am rested), were all trending in the right direction, and I was rested and ready to go.  The first 10 miles went as planned – my perceived exertion was relatively low, my HR was in check, and my pace was on the conservative end for the first ½ of the race.  And then, out of nowhere, both of my quads got terribly sore.  From miles 11-14, I went from feeling really good, to feeling like I just did a monster strength session in the gym after not having lifted for months.  The soreness was debilitating and no matter what I tried – I just couldn’t run.

Since the race I’ve talked to a handful of people smarter than me, and no one can quite figure it out.  I didn’t go out too fast, my nutrition was as planned, and the weather – while really really wet – wasn’t overly hot or cold.  I will probably never figure this one out – which in some respect, may be good.  I really can’t think of much I would have changed in my preparation or my execution – I did the best with what I had that day.  But despite the fact I set myself up for a really good race, there are no guarantees in sport – sometimes, it just doesn’t work.   It can be painfully humbling – but I suppose it also creates a mysterious allure that keeps me coming back. 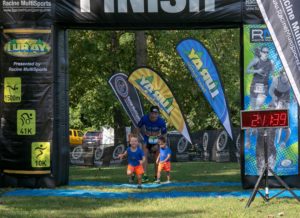