Run Training on the Bike?

The Seashore Classic ½ Marathon was my first official race of 2016 and I was particularly interested in running, since, well, I had not been doing too much running!

For a variety reasons such as wanting to get stronger on the bike, a bit less time available for training with a 1 year old, and a reasonably busy job, my running volume is as low as its been in many years.   Most weeks during the off season I only ran once per week and the past two months I was really only getting in two to three sessions of running.   I also learned from 2014 when I was building up to Kona and running A LOT, that more didn’t really equal better for me.  So the goal has been to see what I could do with much less running and see how some increased bike fitness would transfer.  Suffice it to say, it seemed to transfer pretty well!

The race was a relatively small local race put on by Seashore Striders in DE.  It was extremely convenient since the start was just a mile from my parents’ place in Lewes.  It was also quite a lot of fun since Alice was running, and had managed to get herself back in pretty fantastic shape just 11 months after having Gavin.
It was an out and back course with a beautiful mix of road and trail running with some pretty good race conditions– temps in the mid 40s and perfect sun.  We had a relatively strong tailwind the first half, which meant headwind on the way back.

All in all, the race played out really well.  In fact, the first 2/3rds of the run were fantastic – I felt good, HR stayed consistent, and my pace was better than expected.  The last 1/3rd hurt pretty bad – the winds were a bit stronger and my legs were starting to really feel pretty beat up (perhaps one of the downsides of less run training (or maybe just the fact that the last 1/3rd of any race HURTS bad!)).   I figured that I’d be out there for just around 1:20, which put me really close to the – do I take in nutrition or not? – point.  For the last half of the race I decided that if my HR dropped, or if my pace slowed by a few seconds, that I’d take in a gel.   Fortunately, I held things together just long enough and managed to pull together a really solid performance for the kick off race of the season.  I came in first place overall with a time of 1:16:21.  Alice also had a great day and managed somehow (I don’t quite know how) to negative split her run despite the strong headwinds on the way back!

I’ll have a quick two weeks to try and get recovered, squeeze in a few more training sessions, and then my first triathlon of the season on May 1 at Rev3 Westfields!   I feel very grateful for all the support from Snapple Triathlon Team and the amazing sponsors that work with the team such as Rudy Project, First Endurance, Xterra Wetsuits, and Sweatvac. 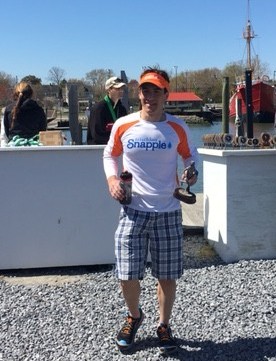